My mom sits in the dwindling light of the evening, cradling my daughter in her arms. She’s sideways in an over-sized chair, head down, oblivious to the world outside the little baby below. We’ve been trying to get Ivy to go to sleep.

Softly, she sings. It’s hard to make out from my spot two rooms over, but as I focus, I pick out the unmistakable cadence of “Hush, Little Baby.” My mom sings a lot, and aloud, and I’m often amazed at the breadth of her repertoire. She’ll move seamlessly from show tunes into Disney, then slip casually into Motown or some 80s hit.

But there’s something about a lullaby. I was too young to remember her singing them to me, but here she is, singing them word for word to my daughter. For the first time in 31 years, I see my mother as she was when she was my age, when I relied on her most of all.

She continues the song, reciting verse after verse. At the next, she falters a little, unsure of the next rhyme.

Every mom has a superpower.  Given how much a baby relies on them, and how much of themselves they have to sacrifice, it’d be impossible to survive if they didn’t come equipped with some superhuman abilities. My mom’s is the ability to keep going, without blinking, in the face of absurdity and adversity. To call her strong or brave would be a disservice; she possesses innate, boundless courage and fearlessness of unforeseeable future.

She mumbles a little, but doesn’t let that stop her from moving into the next verse. I can see Ivy’s eyes fluttering; she’s fading as fast as the sunset and the light in the room. She loops back to the first verse, still sitting still, eyes still focused, powered by equal parts motherly duty and grandmotherly enamor.

My mom turns 60 today. I’ve gotten so used to her as an adult mom – the funny friend you owe your life to, but almost view as a peer – that these fleeting moments of vulnerability and flashes of her own motherhood catch me off guard. Watching her with Ivy gives me a rare window into how she was with me, and in those moments I see just how much of her there is in me, and how much of me will likely be in her.

The love of a parent cascades. It falls onto you and pools; collecting, nurturing, supporting, until it’s finally time for you to pass it on when you become a parent yourself. The love of a grandparent acts as a multiplier. Just when you thought they’d given you all the love you needed to raise your own kids, they muster more – not just for you, but for everyone around them.

Ivy is asleep now. There’s barely any light left, but I can still see the shadowy outline of my mom’s gentle rocking. She’s still looking down, still cherishing. I want to thank her, tell her how much she means and how much her love has made me the man I am today.

But I don’t want to wake the baby.

And somehow, I think she already knows 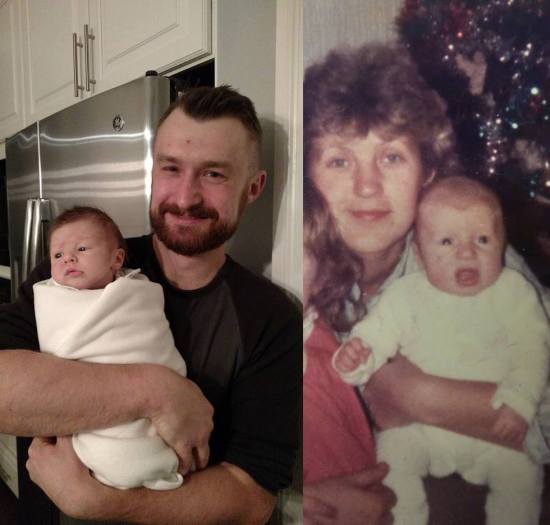 The screwdriver slips from its slotted perch. My knuckles rasp against the mangled folds of an old radiator.

As drops of fresh, red blood well up on my skin, so do the tears in my eyes.

He towers up, and looks down at me as I cradle the wrist of my injured hand, stifling sniffles as well as an eight-year-old can.

“There’s no crying in the garage,” he says.

For my entire life, I regarded my dad’s behavior as a form of classical machismo. He wasn’t being overly harsh, or reinforcing contemporary gender stereotypes about “strong men,” but instead passing on to me the toughness he’d accrued from years of amateur rugby and slinging wrenches on engines in the cold of England evenings. Hardening through experience, to face the challenges of life.

Weakness held no sway around him. I’d flex my fledgling biceps in a show of pre-pubescent power and he’d laugh, quipping, “when I was your age, I had more muscles in my spit.”

I never got angry, or bitter, or resentful, because he practiced what he preached. Rarely did I see my dad wince at physical pain. He never hinted at psychological stress or fatigue. I never saw him cry.

I swallow the pain and wrap my knuckles in an old, oil stained cloth. He comforts me in an utilitarian way, and tells me to wash my hand and go find a band-aid. There’s expectation in his voice, an implication that I will return to work and not let so little a thing beat me. I nod, and wipe away the few salty drops that managed to migrate down my cheeks.

Even when his mother died, I didn’t see him cry. Maybe he did, behind closed doors, but in front of us, he remained forest pond placid. I envied him, then, wishing to be so in control of my emotions that the worst of the world’s worries simply rolled off like water on glass.

My daughter cries. Hard. Her tiny little lungs muster more than enough air to send her vocals chords into a fury of complaint. She has no other way to communicate, and I can’t blame her, but the sound tears through me. It startles me awake mid-REM. It eats at my heart. Her every outburst feels like a failure as a parent.

The layout of our house, as functional and open-concept as it is, means her cries echo and rebound, filling every corner with anguished bellowing. If she’s upstairs, the cries cascade down. If she’s in the living room, the sound reverberates off counter and coffer. It’s impossible to escape the sound of my irrational questioning of my ability to parent.

Except in the garage.

When the heavy door swings shut, I can’t hear her crying. When I pop into the garage to take out the trash, or grab a beer, or snag a screwdriver, I get a tiny respite from my nagging doubt. If I can’t hear the cries, she’s OK, and I’m doing things right. In that moment, as I cross the threshold, I go from father to son again, existing as two spirits in one space.

I remember him, there, and think of her, here.

But there’s no crying in the garage.